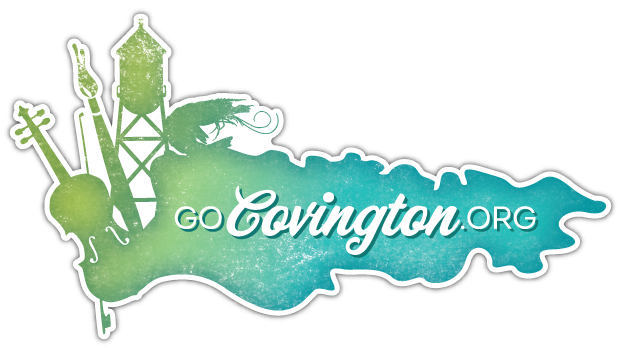 John Wharton Collins, a New Orleans merchant by way of New York, founded the City of Covington in 1813 as the Town of Wharton. John Collins' father, Thomas Wharton fled to Philadelphia from Scotland after the Seven Years War in 1763. Wharton assumed his mother's maiden name, Collins, in order to attain anonymity in the Colonies. It seems that as a Scottish militiaman Thomas Wharton Collins found himself on the winning end a dual defending his sister's virtue, however evidently killing someone more popular than himself. Once in the Colonies Thomas was found to be a Tory sympathizer and imprisoned during the Revolutionary War. His wife Mary successfully gained his freedom upon appeal to George Washington. Thomas was released and the family moved to Nova Scotia where Thomas died in 1790 leaving Mary a widow with seven children. Obviously a resourceful woman, somehow Mary made her way to New York where she reared her children. Son William became a postal boat captain and was the first of the family to move to New Orleans. John later followed in 1800 and opened a mercantile store on Magazine Street.

St. Tammany Parish at that time was part of a Spanish territory called West Florida. West Florida was not part of the Louisiana Purchase territory. Just two weeks prior to West Florida being ceded into the United States, the area that is now Covington was granted by the Spanish to another New Orleanian, Jacques Drieux. John Wharton Collins purchased the Drieux tract in 1813 and established the Town of Wharton on July 4th. He laid the town out in its unique pattern of squares within squares (ox lots) which were accessed by alleyways, and named the town's center the Division of St. John, now the historic district. It is this unique design, which was largely responsible for placement of the Division of St. John on the National Register of Historic Places in 1981. The city was formally incorporated in 1816 by the state legislature and renamed Covington much to the chagrin of John Wharton Collins who then returned to live out his life in New Orleans. His body was returned upon his death in 1817 and he is buried in Covington Cemetery No. 1 facing the former City Hall at the corner of N. Columbia and Kirkland Street. There are conflicting stories as to how the city came to be named Covington. One theory was that Covington was named in honor of General Leonard Covington a hero of the War of 1812. However, local historian, Judge Steve Ellis floats another theory centered around the suggestion by Jesse Jones, a local attorney, that the city be named in honor of the Blue Grass whiskey enjoyed by town officials that was made in Covington, Kentucky.

As the Parish (county) seat since 1829, Covington was the center of commerce, industry and government on the Northshore for many years. The area's principle industries included lumber and related pine products, brick production and agriculture. Goods were transported via the Bogue Falaya River from the Columbia St. Landing across Lake Pontchartrain to New Orleans. Tourism became popular at the turn of the century. People believed in the medicinal powers of the ozone waters of the Northshore and visited hotels in Covington to bathe and partake of "the cure" as it had been dubbed during a yellow fever outbreak in New Orleans in 1878. In 1891 Covington was named "THE MOST HEALTHY PLACE IN THE UNITED STATES" (taken from the book St. Tammany Parish, by Frederick S. Ellis) due to the low number of deaths per population recorded in the 1890 census. It is notable that these healthy people voted against secession in 1860. St. Tammany Parish delegates voted no to secession at the state legislature's convention. By the time Civil War was declared, eight national flags had flown over St. Tammany Parish. The railroad arrived in 1887, and the first telephones were installed in 1884.

The historic Division of St. John comprises Covington's downtown. As a result of the oil bust of 1986, much of Covington's downtown was boarded up as recently as the early 1990s. In response to a slumping economy and decline downtown, the City applied to become a "Main Street" community and was accepted in 1987. The National Main Street Program is a downtown revitalization program, which is administered by the National Trust for Historic Preservation. It consists of a four point approach to revitalization: 1) Organization - whereby a Main Street manager is hired who assembles a board of volunteers from the community who are stakeholders in the downtown area, to implement the program; 2) Promotion - which includes retail promotions and special events to re-establish interest and activity in the downtown; 3) Economic Restructuring - which is an organized effort to attract businesses back to the downtown with incentives, and support retention of the existing businesses; and 4) Design - which oversees the restoration of buildings and maintenance of the integrity of historic downtown architecture. Covington completed the five-year program and became a graduate Main Street community in 1992. As a result of this revitalization effort downtown Covington has experienced a resurgence of retail and professional uses.

Historic Covington is upscale yet approachable; its down-home appeal is fashionably comfortable and never boring.
Come share in our community - you'll like what you see!